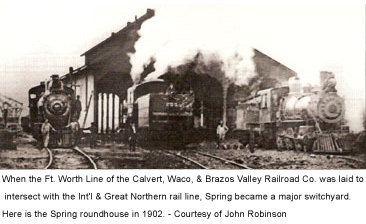 The Spring area was first occupied by a tribe known as Orcoquisac Indians who depended on fishing and hunting which they found in abundance in this area. The first merchants in Old Town Spring could be considered to be the Trading Posts that were established by the French and later the Spaniards called “El Orcoquisac” where trade with the Indians was brisk.

In the early 1800′s settlers began to make their way to the area increasing the trade and growth of the Spring area. Colonization began to flourish after Texas won it’s independence from Mexico in 1836 which was the same year Houston was founded on the Banks of Buffalo Bayou. For the next nine years settlers migrated steadily to the area as part of the “Republic of Texas”. In 1845, Texas became part of the US and generous land grants were relatively inexpensive to obtain for homestead farming which stimulated more growth to the area primarily by German Settlers. After the Civil War, railroads expanded into South Texas. In the 1870′s, railroad tracks were constructed to Houston and rapid industrialization began for the Houston area. Spring was named by railroad workers that were laying the tracks to the south during a harsh winter, when they reached the area it was spring time and they were so excited about winter ending they named it “Camp Spring”. In 1873, Camp Spring was platted by the I. & G.N. Railroad and became a settlement. “Camp” was dropped from the name and Spring became the base of operation for railroad workers. This addition stimulated abundant growth for lumber companies and farmers and created jobs and opportunites for new immigrants to the area. 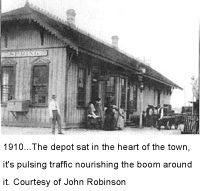 The next 50 years Spring experienced steady economic growth when the rest of the nation struggled. During that period, in 1901, Spring became a crossroads for two intersecting railroad lines and added a roundhouse and 14 track yards. In 1902, several businesses began locating in Spring including an opera house, hospital, lumber mill, bank, hotels and saloons. One of which was Wunsche Bros. Cafe’ and Saloon. Business flourished until 1923 when the railroad relocated their base of operations to Houston. This move crippled local merchants and other business in the area, which were forced to close. Insult to injury came with prohibition, which caused the saloons to close. Wunsche Bros. resisted and was the last saloon in Harris County to close. Along with 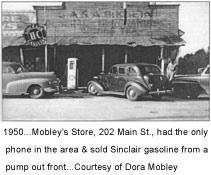 the Depression of the 30′s, Spring was reduced to a small settlement and remained dormant until the late 60′s when local merchants started locating around the Spring Cafe’ (Wunsche Bros.) to take advantage of the economic growth enjoyed by the oil boom in Houston. Old Town Spring emerged with the steady growth of merchants through the 70′s and 80′s into a favorite site of customers and visitors from all over the world and produces several popular festivals and events such as the Texas Crawfish & Music Festival held each year in April. Old Town Spring is voted one of the top attractions in Texas each year.

Be sure & visit the Spring Historical Museum & pick up “Spring, Through the Seasons, Stories of a Texas Town” by Margaret Mallott Smith.